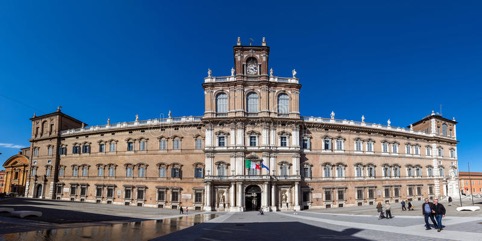 The Ducal Palace was the seat of the Este court between the seventeenth and nineteenth centuries, and after the unification of Italy, the Palace houses the prestigious Military Academy in Modena.

The building, one of the most important princely palaces of the seventeenth century, was built starting in 1634 on the site of the ancient castle of Este, which in medieval times was located at the edge of the city: in only a result of the enlargement of the city walls built by Duke Hercules the castle came to occupy a symbolic position, between the medieval center of the town and the new quarters of the ducal capital straights. The work, initially entrusted to the architect Gaspare Vigarani were later carried out by Bartolomeo Avanzini, but it seems that the project has been undergone by the supervision of Gian Lorenzo Bernini: the great architect seems to have participated in the creation of a work that reveals in a unit style, a baroque solemn and elegant.

The majestic facade, lightened by the chromatic play of the marbles, has been recently restored. The central door leads to the elegant courtyard of honor, seat of military ceremonies, and to the impressive staircase of honor. The ceiling in the central hall is noteworthy, frescoed in the eighteenth century by Marco Antonio Franceschini with the coronation of Bradamante, progenitor of the Este, already celebrated by Ariosto in Orlando furioso. Evocative evidence of the splendor of the small Modenese court in the eighteenth century is the Salottino d’oro, the working cabinet of Duke Francesco III, who in 1756 had it covered and decorated with panels covered with pure gold. A curiosity: the panels were removable, which allowed the Modenese to keep the sitting room, disassembled and hidden in the basement, despite occupations and looting.

The Palace, which houses the Historical Museum of the Academy and a precious library (which can be consulted upon request to be submitted to the Command of the Military Academy), can be visited through the Modenatuor agency.

In front of the facade of the Palace, in Piazza Roma (formerly “Piazza Ducale” and then “Reale”) it is possible to observe the Monument to Ciro Menotti, erected in 1879 by Cesare Sighinolfi, in memory of the patriot who (perhaps at first supported by the duke himself, who then had him arrested and executed) organized a liberal insurrection in Modena and in the province in 1831. The statue holds the flag in its hand and seems to look at the window of the Palace where Duke Francesco IV signed his sentence to death.

For further information about our services and availability complete this form with your data and you request.
You will receive an answer as soon as possible.
o
Check availability